Ever wonder why those slices of fried peameal bacon are just a little too tough and unappetizing?  I did, until I tasted a peameal bacon sandwich at a motorcycle show and watched to see how they prepared it. It was so good…I noticed they had it slow-roasting in liquid… I rushed home and bought a whole peameal bacon and tried it in my slow-cooker. Mystery solved. The result is a tasty, tender piece of meat that you’ll be proud to serve company for a delicious lunch, or simply have in the fridge for the week for breakfasts and lunches.  Give it a try, then make up  these Cubano sandwiches – something different and so very tasty too.

Directions: Pour water into slow cooker, set on high. Place peameal bacon into slowcooker. (water should come about 1/3 – 1/2 of the way up the side of the slab of bacon). After 1/2 an hour, turn slow-cooker to low. Cook for 3 more hours, rotating after 1.5 hours.  Remove bacon from slow-cooker to cutting board to cool slightly. Slice thinly.

several thin slices of peameal bacon – according to your own taste

Olive oil – to brush the sides of your bread

Directions Spread each slice of bread with a thin layer of dijon mustard.  Top 2 pieces of bread with peameal bacon slices, pickles and swiss cheese. Top with other 2 bread slices, brush outside of bread with olive oil. Heat large pan over medium heat. Place sandwiches in pan, cooking until golden brown, then flipping and cooking other side the same way. Remove from pan, let stand for a minute of two before slicing. Enjoy. 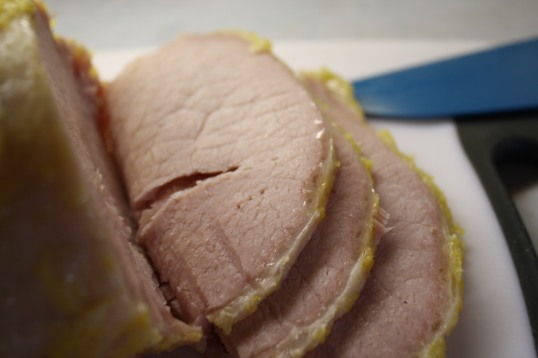 After slow cooking for 4 hours, cool slightly and slice thinly 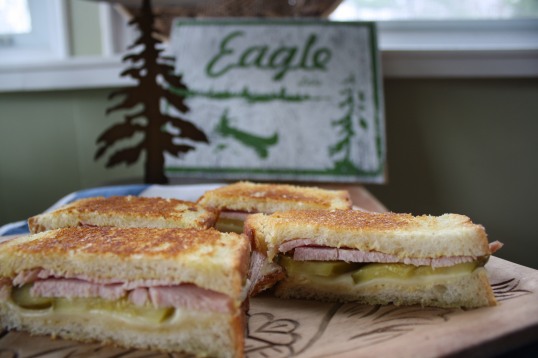